What equipment is required to print an academic building using a 3D printer, is such a construction reasonable from the economic perspective and why is it needed at all? EdDesign Mag has studied the examples of schools and educational spaces in Africa and China, in Madagascar and Ukraine to find out how construction 3D printing is arranged.

A Classroom School in Africa and Madagascar

Accessibility of basic education in many countries remains on a very low level. According to UNESCO, nowadays the number of children under the age of 10 that can neither read nor write the most elementary phrases in their native language has reached its peak over the last hundred years. The access to education can be expanded through the innovative technologies in the field of architecture and construction. For example, there are 3D printers that can print entire buildings. These constructions take much less time than traditional ones and require less economic and human resources.

The world’s first school completely 3D printed appeared in summer 2021 in Malawi – a country in South-Eastern Africa. The project was fulfilled by 14Trees – a joint venture of Holcim, a Swiss manufacturer of construction materials, and British CDC Group, a development financing establishment under the government of the UK. The organization engaged COBOD, a Danish manufacturer of robot printers for 3D construction into the project.

According to the UN International Children’s Emergency Fund (UNICEF), only in Malawi there is a lack of 36,000 classrooms. It will take about 70 years to build them using classic methods. The 14Trees project team thinks that the problem can be solved in 10 years only if 3D printing is used. It took 14Trees 18 hours only to erect the first building in Malawi. It is a one-storey building with an area of 56 sq. m and the only premise inside – a classroom. The school can house about 30 people. 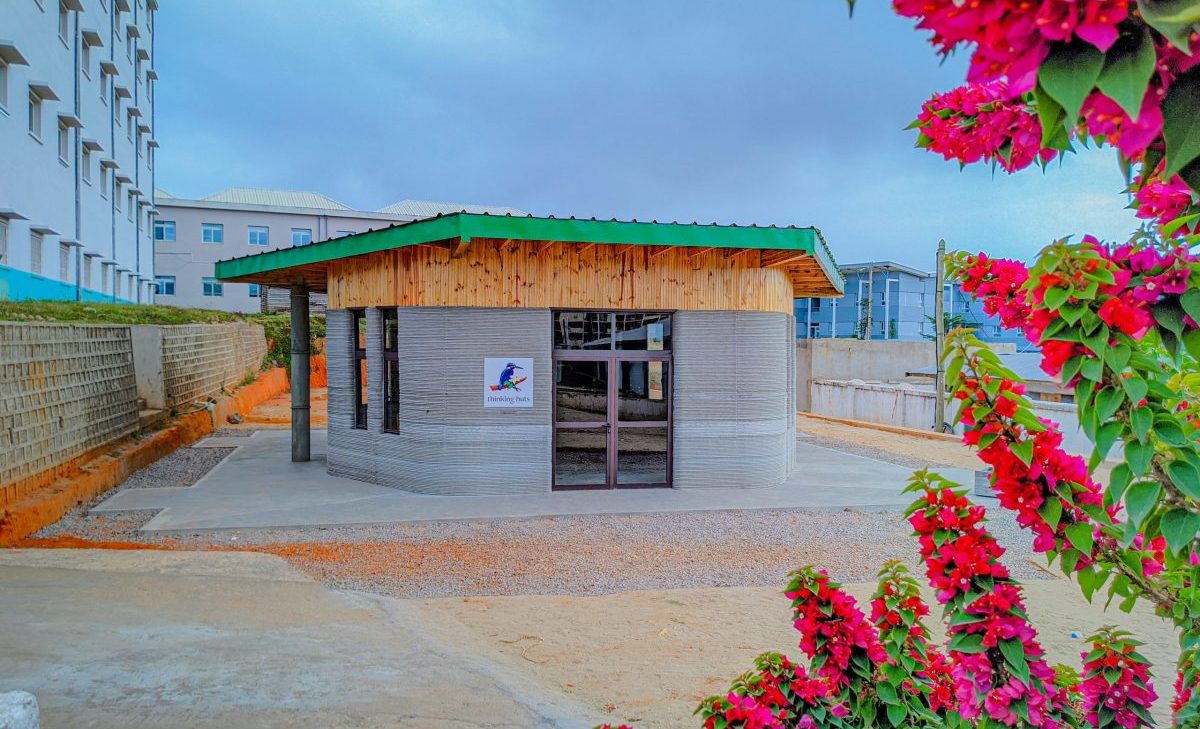 The photo is provided by Thinking Huts

In April 2022, 14Trees printed another school in Fianarantsoa (Madagascar) in cooperation with Thinking Huts. This region also needs accessible education: according to the data of UNESCO, every third child in Madagascar doesn’t finish primary school, while 97% of ten-year-old children can’t read stand-alone sentences even if they have completed the primary stage of school education.

The school with an area of 65 square meters can accommodate up to 30 students. The construction lasted about 18 hours; it took three more weeks to finish the structure. However, according to Maggie Grout, CEO of Thinking Huts, there were about seven years between the idea and its implementation. The time was mostly spent on a search of investors and a team to fulfill the idea.

The school became the first of a hundred establishments where children aged 4 to 16 would study. Thinking Huts plans to build such establishments in the countries with a particularly low level of education accessibility. To achieve this goal Thinking Huts use the technology of 3D printing.

Maggie Grout, the mastermind and CEO of Thinking Huts, is a business lady of African origin currently residing in the USA. The young woman founded the company at the age of 15. “As a child, I was adopted by a family from China; I received good education,” Maggy says. “I know that everything could have gone quite differently.”

Maggie Grout says that Thinking Huts buildings feature a hybrid structure: the walls are 3D printed, and other parts are made from the locally manufactured materials. “It guarantees that we still hire local workers and let them acquire new skills,” the girl assures. Twenty people participated in construction of the school in Madagascar. Thinking Huts hope to create new workplaces in the region.

Reflecting on the future of the project Maggie says that she plans to build another school. This time, the campus will be of a more complicated honeycomb-like shape instead of a rectangular one like in previous projects. Such a format of the structure lets the building house several classes, therefore, the school will be able to enroll more children.

Maggie Grout, the mastermind and CEO of Thinking Huts, thinks that 3D printing construction is more environmentally friendly than conventional methods. “3D printing lets us limiting the amount of produced concrete wastes due to the accuracy of the technology,” she says. She adds that the schools are expected to serve at least 100 years which meets the principles of responsible production. 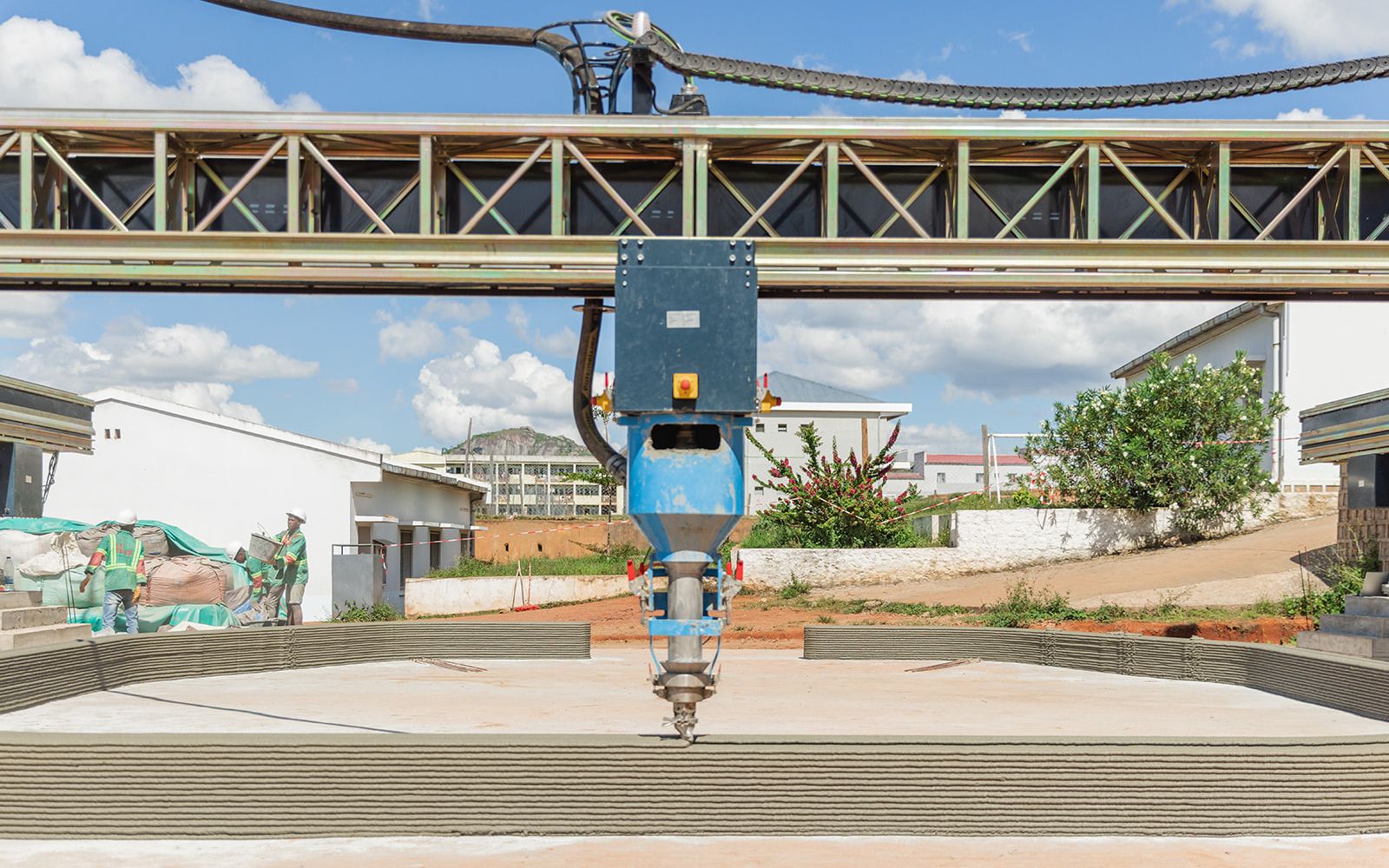 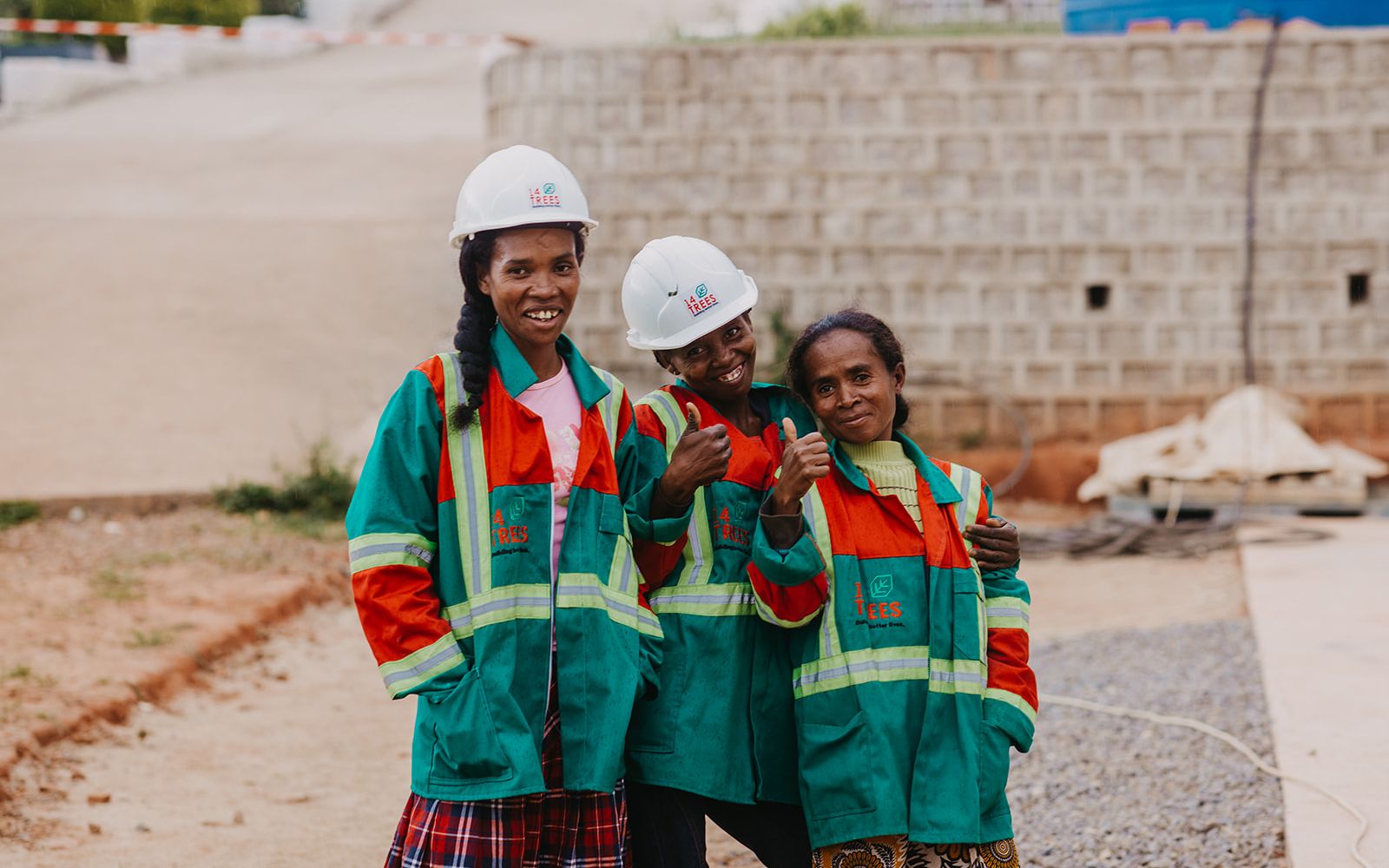 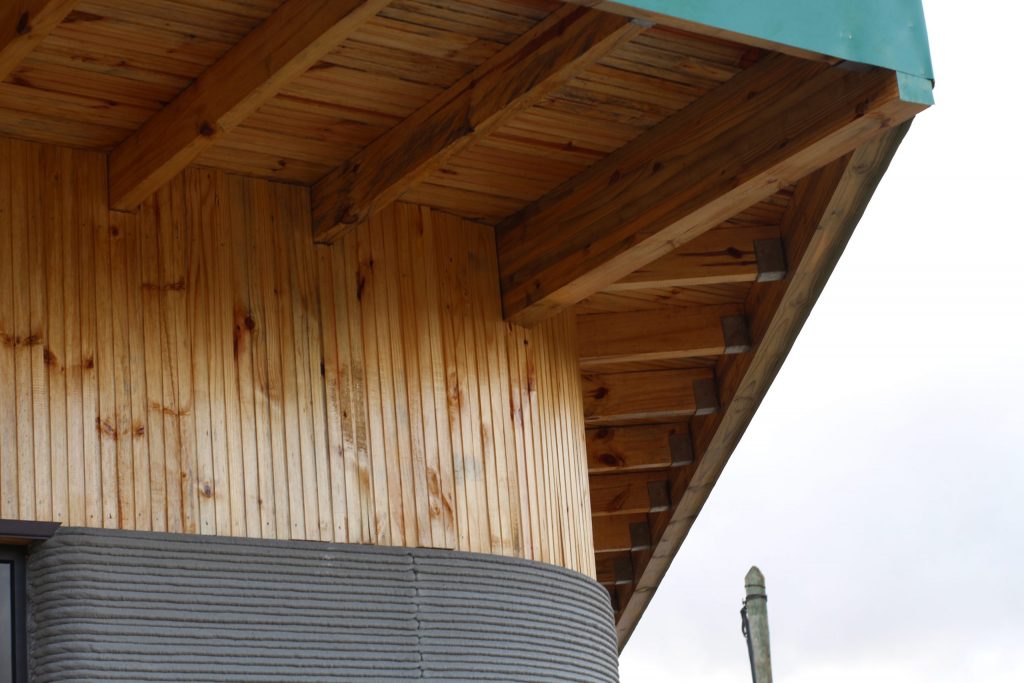 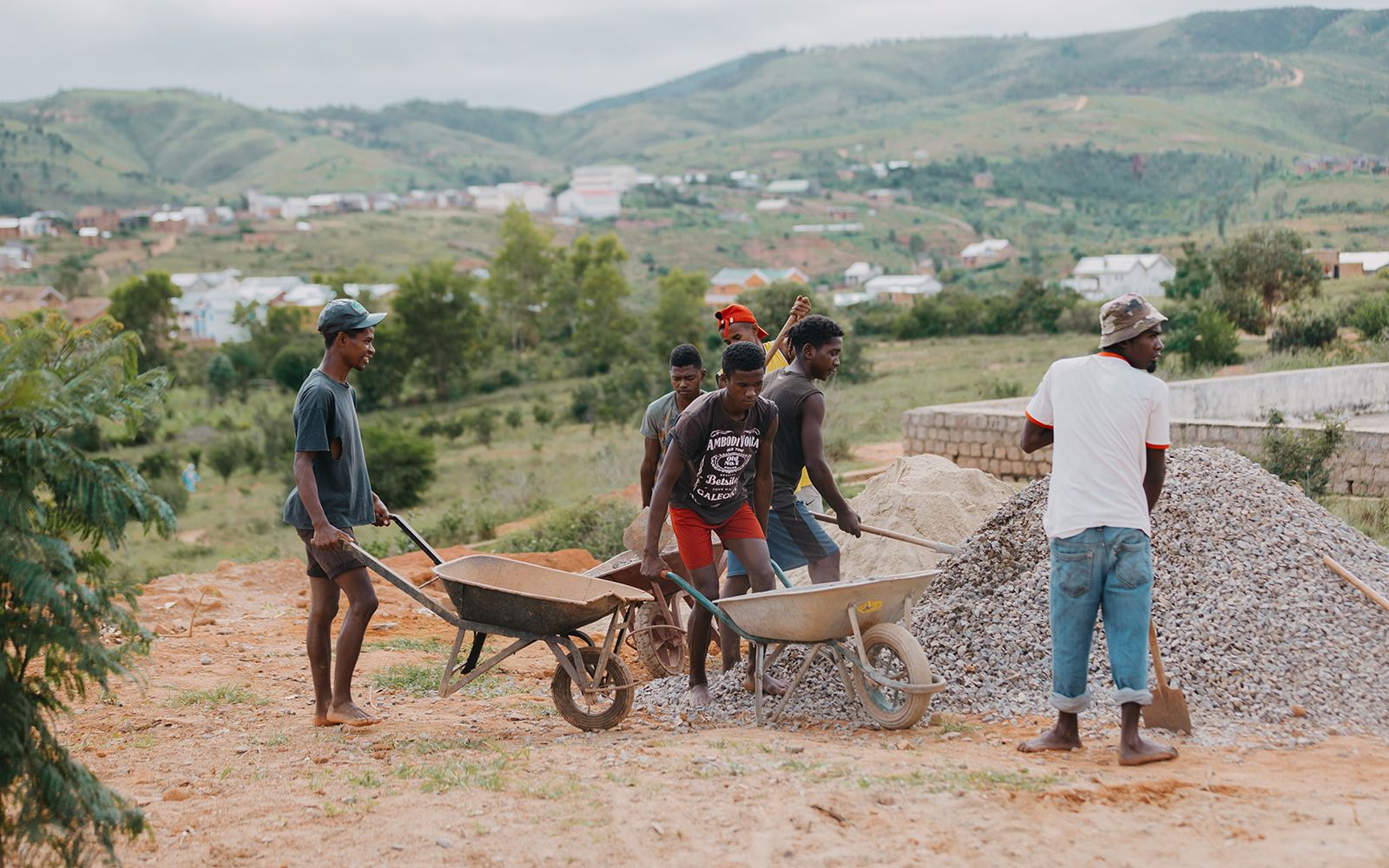 A Primary School in Lviv

An education building for first-graders of School No. 23 will be printed with the assistance of TEAM4UA, a French charity foundation. TEAM4UA uses the cutting-edge construction methods, including 3D printing. The foundation prepares a large 3D printer to be sent to the Ukrainian city in order to erect the walls of the future building.

It will be the foundation’s first project on the territory of Ukraine. In Lviv, there are 250,000 people that have fled here from other parts of the country, and 75,000 of them are children. That is why the Mayor’s Office asked TEAM4UA to erect the school first. 3D printing was chosen, because this method would allow finishing construction in a few months: the campus is promised to be completed by the end of 2022. Construction of a concrete building would have taken up to two years. 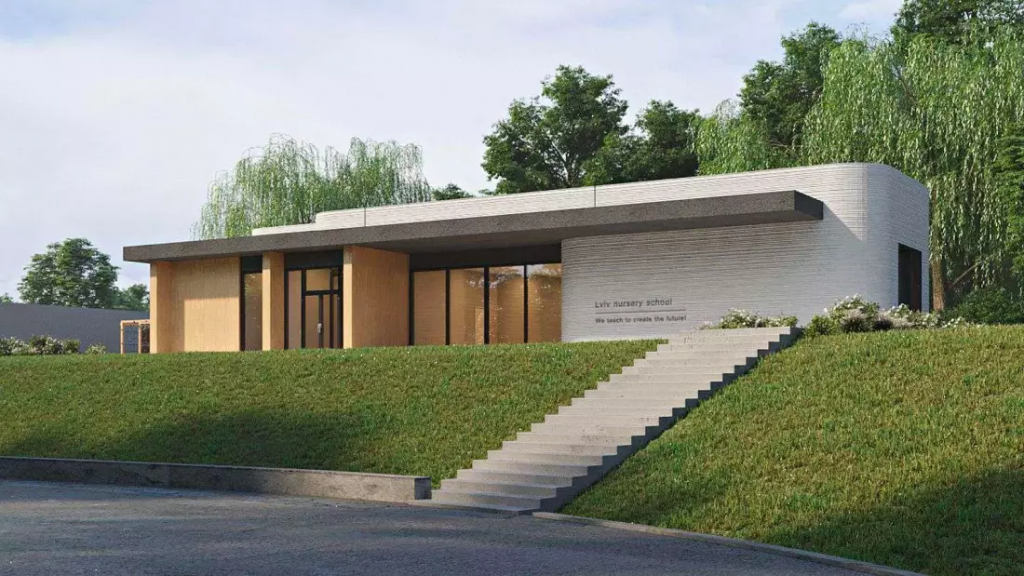 The Ukrainian studio balbek bureau is responsible for implementation of the idea, its architectural concept and visualization of the future school. The architects plan to erect a one-storey structure with classrooms, a common hallway, a staffroom and toilets.

The project can turn into the largest 3D printed building in the world. A new building of the school must start operating next year, in September 2023. Further plans include construction of other structures in Ukraine and delivery of 15 more 3D printers to the country.

The 3D technology is in high demand not only in crisis-ridden regions. In spring 2021, a 3D printed book pavilion opened in Baoshan Wisdom Bay, a science and technology park in Shanghai. The structure is a part of the local project Art Bridge Space. All the structures erected by participants of this initiative are used for book exhibitions, academic lectures, discussions and other events.

The total area of the pavilion is about 30 square meters, it can house 15 people. The building was designed by Professor Xu Weiguo from the Tsinghua University and his students. Afterwards, the designers created a 3D model of the building using the MAYA program – at this stage the feasibility of structure and its stability are tested. Then the finished model is 3D printed. Due to such a method of construction the building features particularly smooth outlines of walls and an arched form.

The project team used special fibrous concrete – it is used for monolithic construction. The fibers of this material that serve as reinforcement are distributed evenly. Besides, fibrous concrete does not require a framework – an auxiliary structure made of wood, metal or other materials to put the building into shape.

Two robotized 3D printers were required to print the structure: one worked on the building’s foundation and its main structure, and the other – on the walls and the roof. Only two supervisors are needed to control each tool, so in total about five people are involved in construction.

Wood is the Way: the Finnish-Russian School of Helsinki 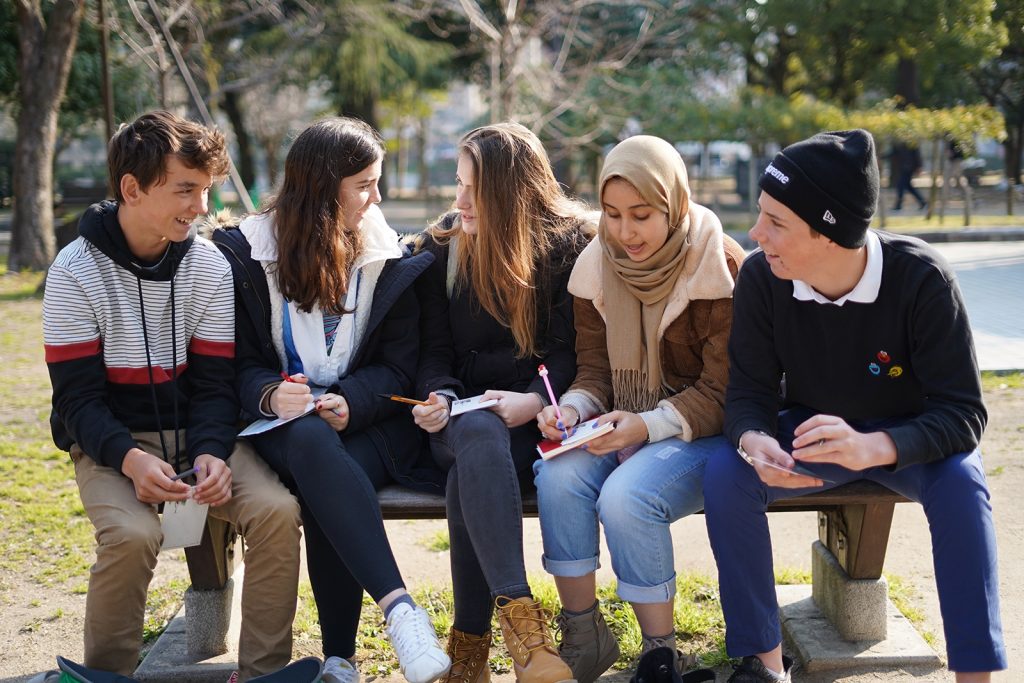 THINK Global School: Place- and Project-Based Learning on the Go 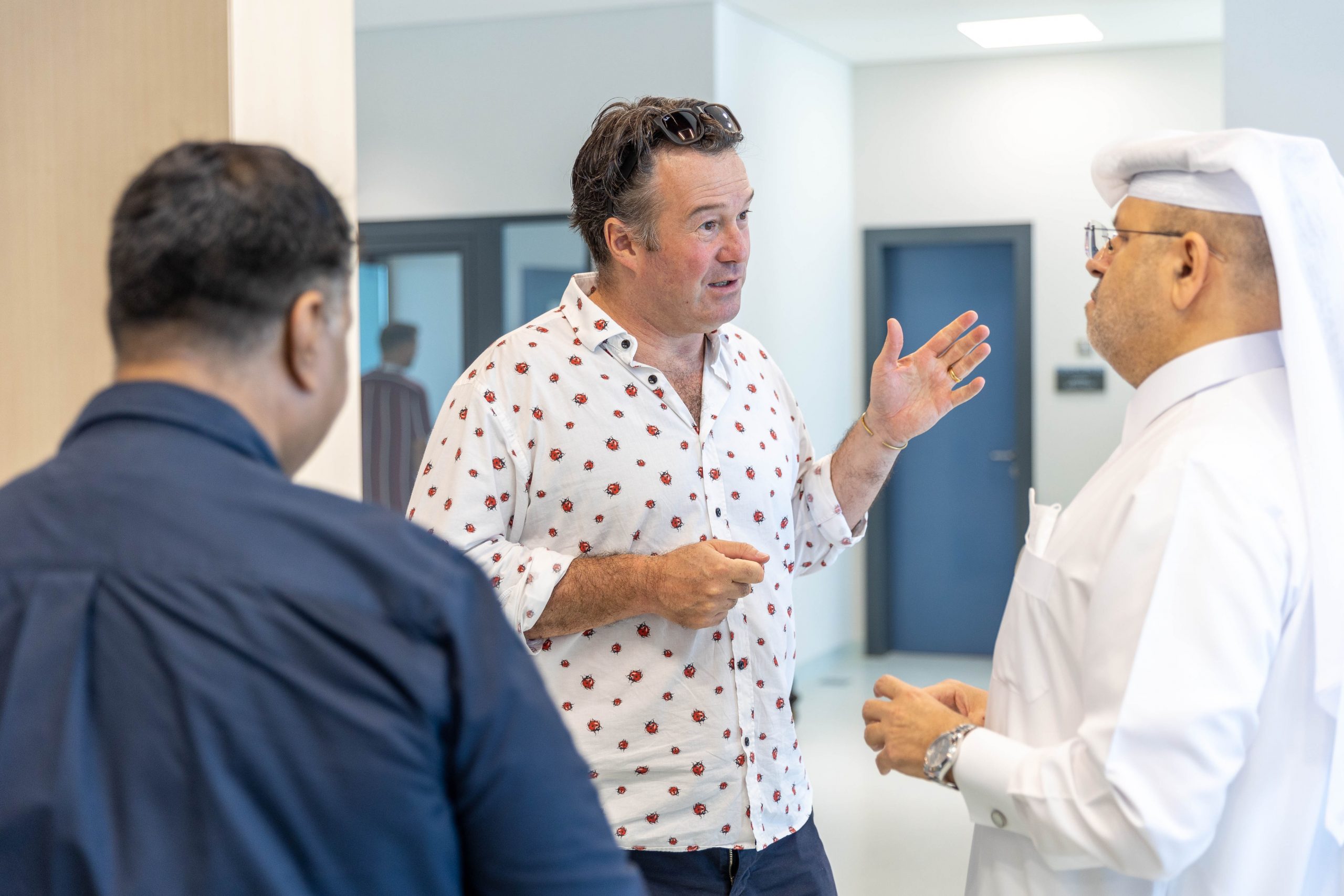 ‘Instead of Doing Differently, We Can Do it Better’: Interview with Niall Brennan, Founder of Artemis Education
Школа сегодня.
Подписаться и быть в курсе
новостей проекта
Для улучшения работы сайта и его взаимодействия с пользователями мы используем файлы cookie To improve the operation of the site and its interaction with users, we use cookies
Понятно Ok